“Modern Audis owe so much to the Audi Cabriolet; it was a true halo car”

It’s easy to dismiss the Audi Cabriolet as just another Audi, but this car was pretty much the turning point for Audi from a niche manufacturer of fairly bland but dependable saloon cars that were sold alongside Volkswagens in the dual brand VAG showroom; to a leading German brand with a lot more strings to its bow. Of course to a small few Audi was already well known, making its mark in motorsport from the very early 1980’s with the Quattro in various guises. But the Cabriolet was more about taking the brand mainstream with the Cabriolet giving the range a halo model. 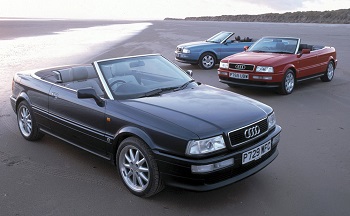 The Cabriolet went on sale in the UK in the spring of 1992 and its main rivals at the time were the SAAB 900 Convertible and the BMW E30 3 Series Convertible, both had risen to fame through the late 1980’s and were just a couple of years away from being replaced by newer models. Audi chose to base their Cabriolet on the recently added second generation Coupe which was a good move as the Coupe was ahead of its time with regards to looks.

Initially the Cabriolet was only offered with one engine, the well-established, smooth and very unique sounding five cylinder 2.3 unit with 133 PS. The gearboxes were either a 5 speed manual or 4 speed automatic. The 2.0E was added a year later and this was an 8 valve unit with 115 PS. Then in March 1994 the 2.3 was dropped in favour of a 2.6 V6 with 150 PS, a 2.8 V6 was added in the spring of 1996 and this unit had 174 PS. The last engine change was in early 1997 when a 1.8 125PS unit replaced the 2.0E.  It had a good specification from the start, as you would expect at the price level it was at. The standard specification included 15” alloy wheels, central locking, tinted electric windows, power steering, ABS and front fog lights. The standard upholstery was Jaquard satin cloth but half or full leather could be added as an option. Electric operation of the hood was added initially as an option about a year in to production.

European production was moved around a bit over the years too, initially it was built at Ingolstadt, then production was switched to Neckarsulm and finally in the late 1990’s good old Karmann took over production in Osnabrueck, all were very experienced at building high end models.

There were hardly any revisions over its 8 year life, just slight changes to the front bumper, headlights and indicators. A version known as the Convertible was added in 1997 and this was the version with a hard top and hard top storage stand. It was around £1800 more than the Cabriolet version. The lack of substantial changes no doubt an indication that Audi had got it spot-on from the start. In fact it didn’t really start to age until Audi moved away from the V8 grille in the last 10 years or so, going for the much deeper version that is still used today.

The Convertible was a very aspirational car from very early on in its life and got the Audi brand in front of a wider audience than just the motorsport fraternity. The pivotal point for this car though was Princess Diana choosing one as her daily driver in 1994. She went for the 2.3 Automatic and took delivery of it in March of that year. Virtually every time she was photographed over the next few months in and around London she was never far away from the Audi and the young Princes were often sat in the back with the hood folded down.

The Cabriolet signed off with a Final Edition in late 1999 with the last few registered in early 2000 on a W plate. The Final Edition was a full specification version, as you would expect, with equipment such as full leather upholstery, 17” alloys and additional specification over the standard car of metallic paint, wood dash inserts, CD auto-changer, wind deflector and on-board computer and a price tag of around £31,000.

The Cabriolet had classic car written all over it from the very start and this is borne out with the volume still alive and preserved today. Approximately 7,000 of the 70,000 built were sold in the UK and around 4,500 are still around today, although many will be tucked away gathering dust and won’t have been on the road for a few years now, which is a shame for such a special car.

The Good: It dated very slowly