There is plenty to tell about Honda’s latest engine and their latest car, including a disappearing act by a meat and potato pie.

The Civic was introduced last year with just a large yet economical and low C02 2.2 150ps diesel engine. The mere fact it was over two-litres though sent shudders down the necks of most fleet managers and retail buyers. Honda needed a smaller engine and very quickly to avoid missing potential sales. The 1.6-litre diesel engine arrived sooner than expected and will be in showrooms shortly.

Honda are not renowned for making diesel engines, they have always been better known for their petrol engines not just in cars and motorcycles but in the marine, agricultural, and generator sectors to name a few. The diesel engines however have been at the bottom of the list, in terms of needs and musts. 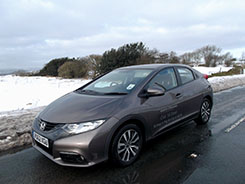 The all-new Civic looks every bit how you would expect a civic to look, even from 200 yards away you instantly know what model it is. However put old and new side-by-side and visually they are quite different. As with the previous model the new Civic will appeal to younger buyers who have never considered one before, and as it still has that Civic styling/look drivers of the previous models will not be put off buying another. The rear light cluster is very bulbous and sticks out, maybe just a bit too much in some people’s opinion, but we are told by Honda that this is for a reason as this design is to help airflow around the rear end which reduces drag, improves fuel consumption and reduces the CO2. Another feature which reduces drag are the two very small diffusers which are situated on the rear panel above the rear wheel arches; they do look like a like an afterthought but the engineers from Honda have assured us that they really do work.

The rear seats are an unusual design too. I went to the local Farm Shop to buy a meat and potato pie, I put it on the floor in the rear and set off home. When I got home the pie was nowhere to be seen, I looked everywhere even under the front seats but no pie. I was convinced I had picked it up from the counter but maybe not, maybe it was still at the farm shop and I had imagined I had put it on the floor? Maybe we were going to have beans on toast instead. On my hands and knees desperately looking for our tea, I saw that the rear seat did not go down to the floor but hung in mid-air, with a huge area under it for storage and a place for a meat and potato pie to hide. This showed off the clever rear seat design, which is useful for storage once you realise it’s there.

The 1.6-litre engine produces 120ps, goes from 0-62mph in 10.5 seconds, has a top speed of 125 mph and C02 emissions of 94g/km. On the front and rear doors on the model we tested there are large stick-on letters that quite clearly state that this vehicles combined mpg is 78.5. According to the on-board computer the average mpg the car managed was 52.7 during the time we had it. The best we got on a motorway run while maintaining 70mph was 58.8mpg, a good result, but still a long way off the 78.5mpg. Admittedly this car was new, the engine was not loosened up and we do live in a hilly part of the country, so we always expected it to be lower than the official figures. Honda are not alone with having fuel consumption figures that are way off the mark, and it is rare that we test anything that comes close to the quoted figures. To give the Civic the credit is deserves it is economical to get over 52mpg regularly, and nearly 60mpg on a motorway. It’s just the fact that Honda state that the vehicle should be achieving 78.5mpg that leaves a nasty taste. 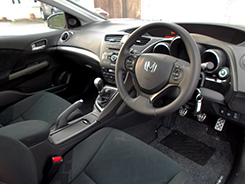 This new engine is excellent, it is quiet, refined and a pleasure to drive, Honda has certainly got it right. The 6-speed gearbox that it is coupled to is easy to operate and slides effortlessly between gears.

The rear wiper needed some adjustment as every time it was down it went about a centimetre onto the bodywork. This is something that really should have been spotted as it left the production line, or when it had its pre-delivery inspection.

The Civic is a good alternative to some other established five-door hatches on the market. The new 1.6 diesel engine is economical, has low C02 and low running costs. It is comfortable, has a huge boot and very modern interior.