We first drove the Lexus IS 300h back in April, on a track, in a very cold and snowy Hungary. The cars then were pre-production, but up to a very high standard. The latest car we drove was a full production car, and instead of being near Budapest, we drove it closer to home – in Yorkshire.

The exterior design is very modern and very appealing. It looks great from every angle, and is all in proportion. The front end in particular is a clever piece of styling, as a swathe line runs from the edge of the windscreen, down the bonnet, around the large ‘Spindle-Grille’ and down through the lower front panel. Looking from the front, it does remind you of an ‘hour-glass’ and looks very distinctive. The side view is also fairly dramatic, with another swathe line that runs from the rear light, through the wheel arch and down along the sill, ending just behind the front wheel-arch. The rear light cluster is very unusual, but works in terms of styling and really adds to the cars unique looks, in a classy way. However the F-Sport has been made to look different to the other models in the range, just like the BMW M Sport and the Audi S-Line, and Lexus have achieved this by the clever use of styling and the materials they have used. 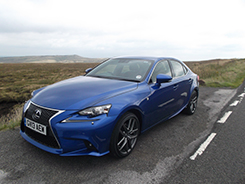 The all-new IS is lighter than the previous car by around 10%, but it is more rigid with 20% greater roll rigidity due to new front and rear suspension. This new model also has revised steering which makes cornering feel lighter and more precise, and although it is a long time since we last drove the old model, this new model is definately more solid and agile.

The IS 300h is powered by a 2.5-litre 4-cylinder Hybrid petrol engine that produces 220bhp, and is connected to a CVT automatic gearbox. The lowest C02 emission figure quoted is on the SE model and is 99g/km, which is the lowest in class. The official combined fuel consumption figure for the SE (which is fitted with 16-inch wheels), is 65.7mpg. Other models, which have larger wheels (Including the F-Sport) have C02 figures of up to 109g/km and fuel consumption of 60.1mpg. The car we had on test though only achieved around 48mpg according to the on-board computer, when driving it normally and on a selection of roads. This figure can increase dramatically if you drive it very cautiously, but 48mpg is not bad for a 220bhp car. 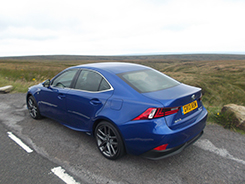 The IS 300h has the well tried and tested Toyota/Lexus Hybrid system that has had very little trouble over the years and has really proved itself reliable. You drive the car as you would any other automatic, but it will set off from start in pure electric mode, and stay in that mode for a short distance at low speeds, but as soon as you want to accelerate away, the petrol engine kicks-in and you have full power. There is however a Button you can press, and it will hold the car in Electric Mode for longer, and will go for up to 2 miles providing the battery is fully charged. The battery is charged through normal driving, and also regenerates while going downhill, slowing down or braking. There is a diagram on the screen that lets the driver know at any moment in time whether the battery is being charged, or being used to drive the car. It is a very clever system with no quirky bits or over-complicated gadgets. The car will do all the work of switching between the petrol and electric motors to get its maximum MPG, albeit still reliant on how heavy the driver’s right foot is…

Most of the interior in the new IS is up to a very high standard and can easily compete with the best of the German Premium manufacturers, but there are a couple of features in the car that can best be described as durable as opposed to stylish. Where the Germans and UK premium manufacturers carefully ensure every part of the dash is up to a very high standard, and looks as good as it feels. Lexus have made the dash more useable, with storage space and easy to use buttons and levers. There is a large flat storage space in front of the satellite navigation screen, which is useful to put a clipboard or a parcel in, but it does make it look untidy, and out of place, in what is a prestige car and not a van. Style is important, clever design even more important, and Lexus seem to have missed the point with the dash, and the interior design does not live up to the expectations from the exterior. 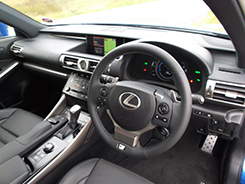 The CVT automatic gearbox is not the best gearbox in the world, but it does work well and is quick at both going up and down through the gears, but under heavy acceleration it is fairly noisy, and as with all CVT gearboxes it does tend to ‘whine’ a bit, which can be a bit annoying. The test car we had in Yorkshire was much better, much smoother and quieter than the cars we drove in Hungary, so some work and modifications must have been carried out in the past few months to make it a better car. However the IS does have a clever device, activated by a button situated on the lower part of the dash; you press it and you get ‘Active Sound Control’ which is a simulated exhaust note, which is projected through the audio system. As you accelerate the noise of a sports exhaust is loud and clear, and this feature almost makes you forget, and block out the sound of the CVT gearbox. This is probably an after-thought by the Lexus engineers, but it is clever and does work.

The new Lexus IS is a nice car to drive, it is quiet, refined, and although the fuel consumption we got was nowhere near the official figures, it was still pretty impressive. The interior is up to a high quality, but one or two changes are needed to make it up to the standards of a German Premium car, but all-in-all, Lexus have created a very useable, good looking executive saloon.