If you think that SUV’s are a modern invention, then think again, as Chevrolet can boast they were the pioneers of the Sports Utility Vehicle. Their first SUV, the Suburban Carryall was launched in 1935 with newer models being introduced right up until the 1990’s, where it was eventually replaced by the Chevrolet Tahoe. 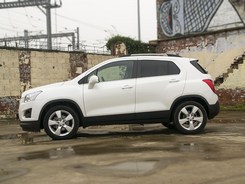 These are all the grandparents of the car we were driving in Croatia, so the Trax has a lot to live up to. The SUV is regarded as a way of personal mobility; its mission is to carry people plus their luggage to rugged remote locations for work, leisure or adventure. It is also a vehicle for school runs and shopping, meaning the SUV is supposed to be a good all-rounder. So is the Trax an SUV?

The Trax is a great looking car, and is very appealing. It looks good from every angle and the large front grille with the Gold Chevrolet Cross is bold, brave and very muscular, and the haunches over the front and rear wheels give it a wide stance look. All these features make the Trax look very distinctive and it does stand out in a crowd, in my opinion the designers have certainly got it right.

The Trax is produced in South Korea and we found it to be generally well built. The plastics on the dash are soft-touch which look good and feel nice, but the door panels are a bit hard and are not quite up to the same standard as the rest of the interior. The seats are comfortable and supportive and there is just enough room in the rear for three adults to sit, but these seats are more suited for children. The luggage space is adequate and you can easily get the weeks shopping or a couple of large suitcases in the boot and if you drop down the rear seats there is up to 1,370-litres capacity. 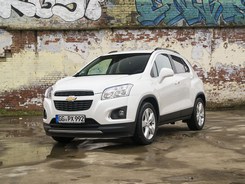 The dimensions of the Trax are: length 4,248mm, width 1,766mm, wheelbase 2,555mm and height 1,674mm, but the interior space seems much more than these dimensions would have you believe.

We drove the Trax around Zadar on the west coast of Croatia around some of the most breath-taking views of jagged coastline, mountains and beautiful lakes. This place is so unspoilt and spectacular it is almost a place that time has forgotten. We went on the motorways there, that are almost perfect, they are so smooth with no ridges, potholes or cracks and we found the Trax to have more than enough power and more than able to cruise at 130kph, with very little road, wind or engine noise in the cabin. 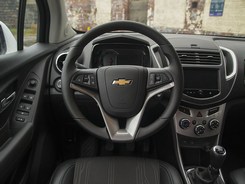 The Trax is built alongside its cousin, the Vauxhall/Opel Mokka, which is already proving to be a success in Europe, but is actually causing GM some problems as demand is outstripping supply. To get around this the Chevrolet factory is gearing up from two-shifts to three to try and keep up with predicted sales.

Like other small SUV’s in this growing sector, the Trax is easy to park, has loads of room packaged in a small space, is economical, practical, and versatile and oozes character and cuteness at the same time. All of this will make the Trax appeal to male and female, young and old.

Is the Trax a proper SUV, will it do all the things it is supposed to? Well… yes, but on a reduced scale, as this is after all a Compact-SUV.