Go anywhere in Europe where there’s a farm up in the mountains, a house well out of the way or down a rough track, and it’s likely that an old Panda 4x4 will be sat on the drive or in a field next to it. Many have one just in case the weather turns bad or if they need to get to other places difficult to reach. The Panda 4x4 is a cheap alternative to other off-roaders that would cost twice as much to buy and run. 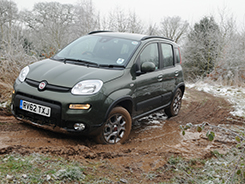 The original Panda 4x4 was launched in June 1983 and the second generation was launched in 2004. It is a City Car and most people buy them specifically for city use. The latest generation Panda 4x4 is a City Car but one with a very capable 4 wheel drive system. There’s a choice of two engines: a 0.9 litre TwinAir petrol and a 1.3 litre 16V MultiJet diesel, and we tried both engines on the launch; both on road and off-road. I have never been a keen fan of the TwinAir as it’s noisy and trying to get the official combined fuel consumption figure of 61.4 MPG is impossible. You would have to drive it so slowly in the highest gear possible and generally be a very cautious, Saint-like driver to achieve the official fuel consumption figures. On the road circuit the car we were driving achieved a lowly 33 MPG – and that was taking it steady. For a thousand pounds more the 1.3 litre diesel makes much more sense as it will nearly achieve the quoted fuel consumption figure of 60.1 MPG, which means over a couple of years you could almost get your money back in saved fuel costs.

When we saw the off-road course located in some muddy woods south of Coventry, we thought even the sturdiest of large 4x4s would struggle to make it from one end to the other as the cars we were using had standard road tyres. Had Fiat taken on too big of a challenge? The muddy hills were quite steep, the downhill stages were long and precarious looking, and it was all a bit scary to be attempting them in a City Car. However this little thing went through, although not with the greatest of ease as there was some scraping going on underneath the car when it struck some boulders and frozen bits of land. This wasn’t a problem though as the people from Fiat told us that the underside of the car was well protected and any lasting damage would be avoided. The 4x4 has an improved ground clearance compared to the standard car so it’s more capable of going over rougher and uneven terrain. We took it through some fairly deep water and again it performed brilliantly. At the end of the gruelling course everyone agreed just how capable the Panda 4x4 was and how it has genuine 4x4 credibility.

Despite the lengthy wording from Fiat on how it works, the one thing to understand is that in reality – especially on slippery surfaces – it does actually work. 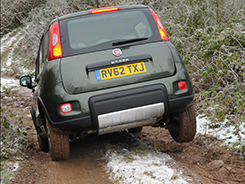 Now for the techy bit on how the 4x4 system works. On a regular 2 wheel drive car the torque is distributed equally to each wheel. If one wheel starts slipping a regular differential will make that wheel turn even more, increasing the slip. The Panda 4x4 features ESP with ELD (Electronic Locking Differential) as standard. The ELD helps improve traction by braking wheels with poor grip on slippery terrain and transferring the driving force to those with greater grip. To enable ‘Lock Mode’ the couplings’ hydraulic circuit is preloaded in order to react more quickly in the instance of different speeds between front and rear axles. So the system works front and rear and left and right. Despite the lengthy wording from Fiat on how it works, the one thing to understand is that in reality – especially on slippery surfaces – it does actually work.