One week, two Jaguars, the F-Type in Spain, and an E-Type in Yorkshire.

The last two-seater sports car Jaguar produced was the E-Type, which finished production in 1973. I’m not wanting to show my age but I sold one of the last ones, it was a yellow V12 Coupe which sold for £3,400. The E-Type was iconic and always will be, so it will be difficult for Jaguar to produce another masterpiece with such desirability.

We had the pleasure of driving the F-TypeV8 at great length up in the mountains above Pamplona, the roads were quiet, in good condition and there was some spectacular scenery. 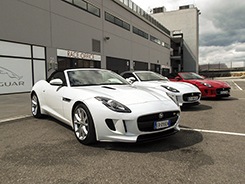 The F-Type is available in three models: V6, V6 S and V8 S, and we got to drive all three models while on the event in Spain. Before I went and after studying the standard equipment, power and cost of these vehicles, I felt the V6 S would be my first choice, but after driving all of them and understanding them better, would my mind be changed?

Ian Callum, Director of Design told us that the team wanted to make the F-Type as small as possible, but it had to have all the characteristics of a full-blown sports car, with no compromises. During the design stage they kept changing small details to improve the styling, and keep it within the size required. The Engineers had to move items that would normally be under the bonnet to elsewhere in the car to save room, and make the front end more appealing. Ian said that modern cars are so full of equipment, it is difficult for designers to find some where to put it all, but with the help of the engineers they have made it possible.

The design does take some styling cues from the E-Type, but not too many. The F-Type is bold and modern, fortunately what is does have in 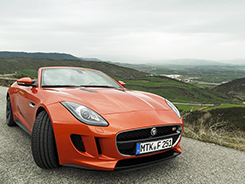 common with the E-Type is that it looks great from every angle. It is certainly an eye-catcher and head-turner. The long clamshell bonnet with the large power-bulge looks every bit like you would expect on a 2 seater  Jaguar, as does the boot lid which has a ‘dip’ in it which makes it reminiscent of the E-Type. The design team and engineers have created a very stylish car that does have some nostalgic features, but the swathe lines and features are very up to date and just right for today’s market. This new Jaguar should stand the test of time for many years to come.

We had the pleasure of driving the F-TypeV8 at great length up in the mountains above Pamplona, the roads were quiet, in good condition and there was some spectacular scenery. It would have been difficult to count how many corners we went around, but it was in the hundreds. The 8-speed gearbox was up and down constantly, the selections though were very quick, quiet and efficient. The steering was very precise and the brakes were, as expected for a car with this amount of power, brilliant. The handling was also spot-on, with only the odd movement from the rear under heavy acceleration which was partly due to the roads which were a bit moist and covered in leaves and needles, which had dropped from surrounding trees. The drive was superb, very enjoyable, and did prove that Mike Cross and his Vehicle Integrity Team had done wonders for the car.

The body on the F-Type is made entirely from aluminium, which has considerable weight savings, and offers more robustness than steel. Using lightweight materials also helps to reduce C02 and improves mpg, acceleration, braking and agility. 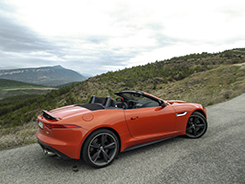 There are many nice features on this car, such as the ‘pop-up’ deployable spoiler that activates at speeds above 60mph, creating a 120kg down-force on the rear to help keep the car stable and the rear wheels firmly planted on the road, the roof that goes up and down in 12 seconds and can be operated at speed of up to 30mph, and the door handles which are flush with the body, and are only visible when you want to open the doors. The S models have an ‘Active Exhaust System’ which is basically a ‘Loud-Button’ – press a small switch near the gear-shift and the exhaust note roars into life, changing the whole sound of the car. We did turn it off though while going through some of the small sleepy villages, as we did not want to wake the locals.

The interior is first class in terms of design and quality, and the bold stitching option for the leather dash is well worth the money. Although the 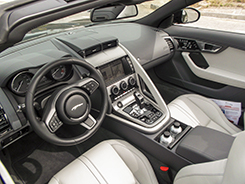 cockpit is relatively small, there is plenty of room for two large adults, and the designers have managed to create two separate areas for driver and passenger, by almost dividing them off. At first when I got in the passenger side, it did feel a bit strange with a divider running from the top of the dash down to the side of the gear-shift lever, but after a while in the car it began to feel quite normal. You do feel surprisingly comfortable in the car, the seats are supportive yet firm and the ride of the car is not harsh at all. Jaguar has got the balance between ride, handling and comfort just about right.

Many, many more words could be written about this new Jaguar, in fact a whole book could be written just on the engineering and design alone.  The facts are that Jaguar has got this car right, they have obviously spent a lot of time and money in the development, ensuring everything in the car works perfectly, making the package right and the price competitive.

Is the V6 S still the best choice? – It certainly is… It has more than enough power, the standard specification is excellent, it looks great, and is priced correctly.

The Northern Group of Motoring Writers held a special event to celebrate their 40th Anniversary and invited manufacturers to bring some old cars along….. 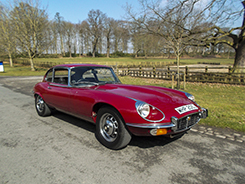 This was the second Jaguar I got to drive in the space of a few days, and it really is a classic British Icon. The car belongs to Jaguar Heritage and is in pristine condition, due to it being excellently cared for and loved by the volunteers who keep it running and in perfect working order.
This E-Type is powered by a V12 5.3-Litre petrol engine that produces 244ps, goes from 0-60 mph in 8 seconds, has a top speed (if you are brave enough) of 135mph and an official fuel consumption figure of  21.3mpg.

We took it out on the roads around Harrogate and the first thing you notice when you get in the car is the ultra-thin three-spoke steering, with five holes in each of the spokes to give the driver a sporty look and feel, which is just not seen these days. To get in the car you have to climb over a large sill, but once in the car it is very comfortable. You have to turn the key, and press the accelerator to the floor to get plenty of fuel into the engine before it 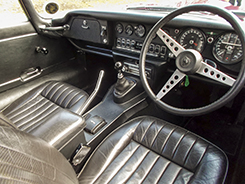 roars into life, but as soon as you have got the engine started it makes the most wonderful sound. The interior is in fantastic condition with the leather seats looking as though they have hardly been sat in.

The rocker-buttons for all the controls are large and pretty basic, but they all worked and were functional.

Out on the road it was an honour and a pleasure to be able to drive such a masterpiece, but it is not as quick as you think it is going to be. In fact it is quite leisurely and most modern Hot hatches would probably be able to beat it away at traffic lights. But who wants to race in this car? The last thing you want to do when driving it is to do any damage to either the mechanical side, or the body. So caution, safety and patience is the way to go. 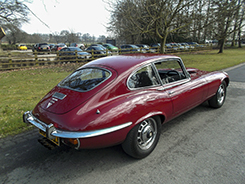 The four-speed manual gearbox is easy to use and it goes up and down the gears as good as any new car today. The engine note when out on the road is superb, and you can hear it from a mile away. The V12 was the first E-Type to have Power-Steering as standard, and this made driving around Harrogate feel light with effort required to go around corners.

Two great cars in one week, and both the best of British from different eras.