If you think that SC means Sports Coupe, or anything else like I did you may well be wrong, as SC does not really stand for anything. This new Leon will be simply known as the SC, and is really just a three-door version of the five-door hatchback. 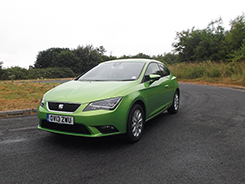 The all-new Leon is a good looking car, and the SC has some very attractive lines, especially the side swathe lines and the very predominant styling around the rear light cluster. Although you may have to question whether the costs of any minor repairs could be expensive due to the elaborate design, which in itself could have complications even for a small supermarket scratch or dent.

The first Leon was produced in October 1998, with the first one being sold in the UK in March 2000. The MK2 version was launched in 2005, it has always been a popular car throughout its life, and was only available as a five-door. The latest Leon five-door was unveiled last year and went on sale a few months ago, and now for the first time a three-door version has gone on sale. 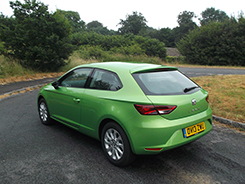 The wheelbase of the 3-door is 35mm shorter than the 5-door, which SEAT say give it a sportier stance and the roofline is lower by a few millimetres which also gives it a sleeker, sportier look. The rear tailgate is more sloped than the five-door, giving it a rakish profile, and the rear wheel arches are wider, which give it a more purposeful look.

We drove the SC around Gloucestershire, and there were no surprises. As we expected it drove very similar to the already tested five-door. We drove a variety of engines and found them all to be quiet, efficient and economical. The one to go for is the 1.6-litre TDI diesel, as this offers the best all-round-value and is a pleasure to drive in all conditions.

Getting in and out of the rear is made easier by it having easy-entry front seats, which slide and tilt very easily, and go back to the original driving position due to them having memory adjustment. There are three rear seat belts, and the car can accommodate five adults in total, although space in the rear is not huge, and I can’t imagine people in the back going very far, very comfortably. The boot however is the same size as the five-door at 380-litres with the rear seats up. 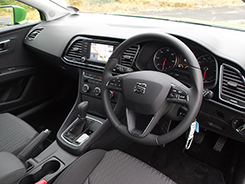 The SC has ‘sports-shaped’ front seats on all models (unlike the five-door where they are only standard fitment on the FR), and I found them to be supportive and comfortable. Rear headroom is only slightly less than the five-door, which is possible as the design takes a three-door shape, and not Coupe-lines which normally means head room is compromised.

The SC costs £300 less than the equivalent five-door, but there is some extra specification as standard on the three-door, which does make it look better value. Three models will be available at launch: S, SE and the sporty FR.

The third member of the Leon family is due early in 2014, in the guise of an estate version which will be called the Leon ST.