Seeing the name ‘Cross Country’ might give you the impression that this car is an off-roader or a mild four-wheel drive. You would be forgiven for thinking this, but you would be wrong. 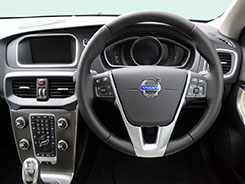 Volvo see the V40 being in the C-Segment Premium 5-door, 5-seat sector, its main rivals are the BMW 1-Series, Audi A3, Mercedes Benz A-Class and the Volkswagen Golf. Volvo have needed this car for a long time to be able to compete in the second largest segment in the UK, and now they have the V40 they should be able to take some customers away from the other more established players.

There will be no diesel AWD Cross Country available in the UK, which is a real shame as this could have proved to be a winner for Volvo, as a four-wheel drive diesel C-Sector Hatch is a fairly rare car in the market. The only model available with AWD is the Petrol T5 Auto which is powered by a 2.5 litre 5-cylinder petrol engine that produces 254hp, has a top speed of 146mph and does 0-60mph in 6 seconds. The official combined fuel consumption figure is 34mpg and the C02 emissions are 194g/km. Volvo predict that they will sell 12,500 V40’s in the UK this year with 1600 of them being the Cross Country variant, however with the AWD prices starting at around £33,000 Volvo expect only 2% of the V40 Cross Country sales will be these models. 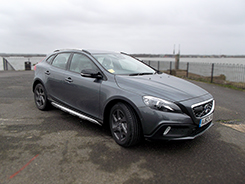 The model we tested was a V40 D4 6-speed manual Cross Country SE Lux model with sat nav. We started in Baughurst and were on our way to Southampton, and on a wet and dreary day we rather hoped the car would cheer us up. The route took us on some twisty minor B Roads with flooded fields, rising water levels in rivers and streams and roads covered in debris from hedgerows and trees. A four-wheel drive model would have suited these conditions much more, but unfortunately our Cross Country model only had two-wheel drive.

The 2.0 litre D4 diesel engine is really sweet, it performs well, pulls away from traffic lights effortlessly, but it really shows its power when entering a motorway, hold it in 2nd gear and with the right amount of power, at the right time its off like a rocket. On the M3 going south it sat easily on the motorway, at 70mph the rev-counter was showing the engine was doing little more than ticking over.

The 5-cylinder D4 diesel engine is excellent, so refined, quiet and has plenty of power. It produces 177hp, goes from 0-60mph in 8.2 seconds and has a top speed of 130mph. The official combined fuel consumption figure is 64.2mpg and its C02 emission figure is 117g/km. Back on the B-Roads it showed a few times just how good the brakes and the handling were as we avoided bits of the countryside all over the road. On some roads it did actually feel like we were going cross country.

The Cross Country does have some distinguishing features to set it apart from the standard V40 hatch. It has a modified chassis with an increased ride height up to 40mm, dark contrasting bumper and honeycomb mesh grille, Upright DRL-lights, aluminium under-body protectors, a re-styled rear bumper, and the interior has a Copper Dawn inlay. These features may not sound much, but in reality it does make the car look significantly different.