Chevrolet has become an established brand within the UK car market, after being run as an independent brand by GM for approximately 10 years. They have a good model line up across various sectors, and the new Trax sees them enter the mini-crossover sector for the first time.

The last time we drove the Trax was a few months ago on the International Press Event in Zadar, Croatia, where the scenery was stunning, the roads brilliant, and the car seemed very capable. Would our day near Macclesfield be just as good? 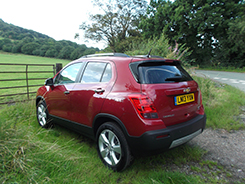 The first thing to say about the Trax is that it is not as cheap as you would think. Coming from a Korean budget brand it does seem a bit on the expensive side if taken in isolation, but compared to the direct competition it is similarly priced. The perception Chevrolet is putting over is that their cars are attractively priced with plenty of specification and a reasonable level of quality.

The Trax is the sister of the Vauxhall Mokka, and is built alongside it in the plant in Korea. Both cars are good looking, and have plenty of style and image, but with that large Chevrolet Gold Cross on the front grille the Trax does seem to have more presence.

This sort of car is now taking over from the traditional small estates, as these small SUV’s just offer so much more: more headroom, more legroom, more passenger comfort, and a much better and more rugged overall design.

The Trax comes with either a 1.4 litre petrol engine that produces 140ps, or a 1.7 VCDI diesel engine that produces 130ps. Both engines are available with either 2WD or 4WD – depending on the model. We tried a variety of models around Macclesfield, and although the petrol looks good value on paper, as it is quite a bit cheaper than the equivalent diesel, the diesel is the one to go for as you can easily get 20 more miles per gallon from it, making the running costs more attractive. 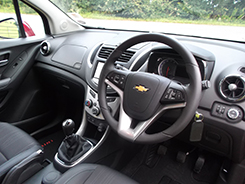 The diesel is not the quietest car we have driven though, as there is a fair amount of engine noise in the cabin. However at cruising speed on the motorway or dual carriageways the noise is not too intrusive, it is just at lower speeds and at start-up where it can be a bit noisy. The petrol though is quite the opposite and is very quiet and refined, but it is the fuel consumption that would still put me off buying one.

The interior is up to a high standard and has a refreshing look and feel with soft touch plastics in most areas. The handling is exactly what you would expect on this type of car, nothing special, but capable of going around corners with little body roll which makes it feel safe and solid, especially with the seats that are comfortable, supportive and hold you in place nicely when cornering.

I really like the Trax, as it offers so much, it looks good, the engines are tried and tested, and the quality is reasonably high.