What next for the world’s best-selling SUV?

If you say CR-V, then most people will know it is a SUV from Honda, it is one of those names that is recognised and you don’t have to explain what it is, it is not an anonymous name, it is a household name and a well-liked car.

This Swindon built CR-V, 4th Generation, has had some minor cosmetic surgery, and to the untrained eye, it doesn’t appear to have changed much at all. But if you put the current car alongside the new one, then some of the small changes become apparent. It has new bumpers and skid plates which give the appearance of it looking wider, lower and a bit sleeker. It has new headlights and new LED rear lamps, and that is basically it for the exterior. 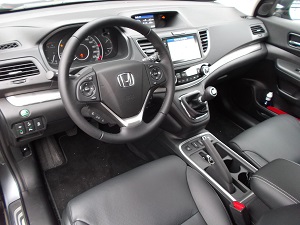 The interior has quite a few changes, and some nice touches to make it look and feel a bit more premium. The new 7” touch-screen display, which operates many features including: satellite navigation, bluetooth, infotainment and audio, and it is all really easy to understand and operate. The new Infotainment system called “Honda-Connect” with “Aha”. Aha is a smart phone app manager that organises all your phone apps and content so that you can access it from a single app, things such as digital radio stations, Podcasts, Twitter and Facebook. Then you can connect your smart phone to the navigation system using Hondalink to access the Aha app. Cleary only the audio element can be used on the move, but it means that you have more choice of entertainment while in the car and can continue listing to that all important Podcast that you were listening to before getting in the car.

It is under the bonnet where most of the facelift budget has been spent. In the old range there was a 1.6 and a 2.2 diesel offering, with the 2.2 reserved for the all-wheel drive version. The 2.2 has now gone and it is replaced by the 1.6 unit, but it has a power upgrade on the all-wheel drive. The engine produces 160ps in the all-wheel drive, as opposed to 120ps in the 2 wheel-drive version, or the 150ps in the outgoing 2.2. The CO2 reduction is impressive too; the old 2.2 manual was up at 144g/km whereas the new 1.6 equivalent is down at 129g/km. 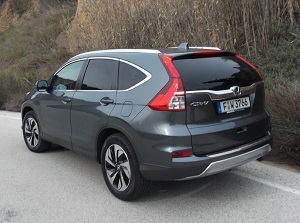 In the cabin, it is noticeably quieter a great deal has been done by Honda engineers to reduce the noise levels. They have used new sound absorption material throughout the vehicle, doubled the thickness of the door seals, and put a new seal on the front end of the bonnet. All these small modifications, add up to a car that is 6% more quiet.

There are four main trim levels, S, SE, SR and EX with Navigation versions of the S and SE. But the S trim level is only available on the 2 wheel-drive version. As well as the two 1.6 diesel offerings the 2.0 petrol is still available too and it retains the 5 speed set up in the automatic option.

The new CR-V, doesn’t look that much different, but the new engine, new auto gearbox, a more refined interior, and a reduction in noise, just made a very good SUV, seem even better.

Do these improvements appeal to you?