To Infiniti and beyond (well, to Bruges and back)

It was an interesting start with the Q70. In the brochure, specification sheets and price list this Q70 is known as the Sport Tech, but on the boot of the car, it clearly says Q70 S, is this the only confusing thing about this Infiniti? 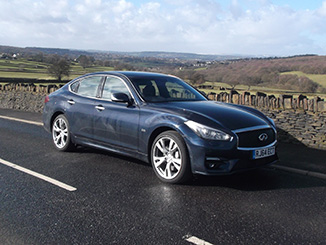 The car we had on test was powered by a 2.2 litre 4 cylinder diesel engine that produces 170ps and is coupled to a 7 speed automatic gearbox. It accelerates from 0 to 62mph in 8.9 seconds and has a top speed of 137mph. The all-important CO2 emission figure is a very reasonable 129g/km considering the size of the car. Talking of size, the Q70 measures 4,980mm in length, compared to its rivals, the BMW 5 Series at 4,907mm, the Audi A6 at 4,933 and the Mercedes Benz E-Class at 4,879mm. To put it into perspective a Mondeo is 4,871mm long.

We had the car for a week, and had planned to go to Bruges for the weekend so booked the P&O Ferry from Dover to Calais. We asked Infiniti UK for all the relevant travel documents and the necessary travel pack, including breathalyser for France. So off we went, down the M1, around the M25 and over the Dartford crossing, then down towards Dover. We boarded the P&O ferry mid Saturday afternoon, and within 90 minutes we were in France, a further 1 hour and 15 minutes and we arrived in the very pretty town of Bruges with its historic square, ancient churches and its famous canals.

During the weekend we covered 730 miles and the Q70 average fuel consumption was 44 mpg. The official combined figure given was 57.6 mpg, but we realised it was never going to get anywhere near that figure no matter how it was driven. Still… 44 mpg is a pretty good result considering that it weighs nearly 2 tons without adding any passengers or luggage. 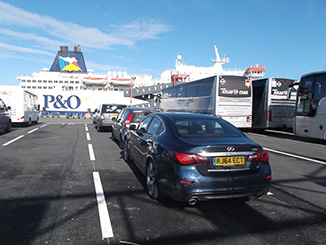 Infiniti is still a fairly unknown brand, while we had the car, people were still asking what it was, who made it, and where was it built. Even the loaders on the P&O ferry, who must see thousands of cars a week, were intrigued to know what is was, as they didn’t recognise the badge on the bonnet. Infiniti have got their work cut out getting the message over; obviously putting their name on an F1 racing car, doesn’t appear to have had the desired effect.

The interior is classy, it is comfortable and built to a very high standard, but it may be a bit cluttered. There are buttons all over the dash, by the gear change, by the steering wheel… it would take some getting used to before you know where everything is. Some of that will probably be cleared up as new Infinitis are launched, moving on to a more modern system based on a central touch screen rather having more buttons than your local haberdashery. Because while the Q70 name is new, the car itself has really been around for a while, as it was previously called the Infiniti M.

For the size of car, the boot is not as large as you would imagine which is predominantly due to it being rear-wheel drive. Because of the fact that the rear suspension struts, the drive axle and everything else involved in making the car move has to go somewhere at the rear, the Q70 has had to sacrifice some of its luggage area to make room. Also, the carpet in the boot is not good quality; in fact it looks and feels cheap.

Rear legroom is good but it is only designed for the comfort of two people; if you get a third in the middle, the space is compromised, as shoulder room is not great, and then you have got that transmission tunnel running through the car, which doesn’t help. 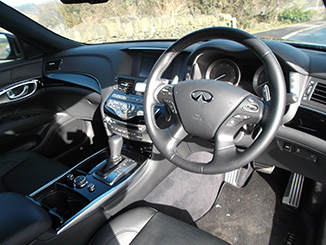 The Q70 looks good from every angle, and that large bold front grille looks so masculine and dynamic, the large 20 inch alloy wheels set the car up, and look very sporty and just the right size for the car.

One really nice touch in the interior is the analogue Infiniti clock, which is positioned in the centre of the upper dashboard; it has a real quality feel and looks fantastic. Such a small feature but one that adds so much to the interior premium look.

Infiniti dealers in the UK are growing, but are still few and far between, although Infiniti are working on this and the volume should continue to grow as the months pass by. This will need to happen as quickly as possible, as the amount of new cars Infiniti intend to launch over the next couple of years will demand that there is more representation up and down the country.

The Q70 is a really pleasant car to drive, and it effortlessly covered 730 miles in two days with better than expected fuel consumption. All those buttons were a bit over the top but they were all needed to operate all the systems. Those buttons were of high quality and the haptics were every bit as good as any German premium brand. A nice couple of days, sat in a very nice place, but in an anonymous premium saloon that very few have heard of.

Is there enough equipment and luxury to temp you away from your regular premium brand?