UK Press Event, Devon
SKYACTIV Technology and the making of the new Mazda2...

You may think Devon is a strange place to have a new car launch. There are some good roads, but there are also some not so good roads. There are some great views when you were not up in the hills above the clouds, but some heavy rain when you are below them. We also had some lovely afternoon cream tea. 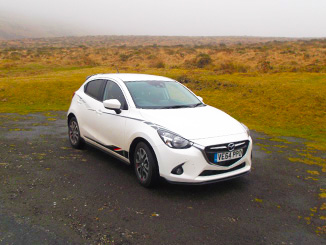 The front end of the all-new Mazda2 is quite striking; it is very bold and makes a statement. It has some nice side swage lines, but the rear doesn’t have the same distinctive looks as the rest of the car, it seems to lose something in terms of style once you walk round the back, it is nowhere near as exciting as the front.

The interior is on the whole, pretty good; the lower dash has a quality look about it. The cars we were driving had a “leather-look” effect around the dash which looked and felt really good. The lower door panels were also fitted with some high quality materials that added a touch of premium look and feel to it. But the upper part of the dash, and upper panel of the doors were to be blunt, rock hard, with “scratchy” plastic, more akin with cars being produced years ago, it just spoilt the interior for the high specification derivatives.

Mazda make a lot about their SKYACTIV technology which is on the whole very clever and helps improve CO2 and fuel consumption. SKYACTIV in a nutshell is where Mazda engineers have looked at every part, every detail of the car, and actively made it better, lighter or just improved the design. This has helped improve weight, in fact the Mazda2 kerb weight is just over 1,045kg, which sounds great, but does have its disadvantages too. You can tell when you close the rear doors and the tailgate that weight has been saved, so it sounds a bit “tinny” when you shut them, but you can’t have everything. I’m sure a decision has been taken high up in Mazda to either have a lighter, more efficient car, or nice sounding door closures. 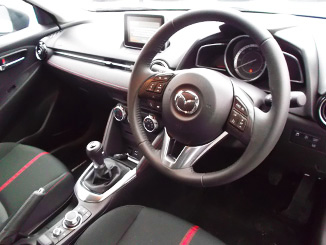 The engine line up is: 1.5 litre petrol with 75ps, 90ps or 115ps, and a 1.5 litre diesel with 105ps. During the time we were in Devon we drove the petrol 90ps with a 5 speed manual gearbox, which we thought was underpowered, and the 115ps with a 6 speed gearbox. These two engines were like chalk and cheese, one not so good, the other was brilliant. Then we drove the 1.5 diesel with a 6 speed manual gearbox, and that had more than enough power. During the time we drove it, over the moors, through towns, small villages and along the coast, with a lot of stopping and starting, we achieved 55.8mpg which we thought was a really good result. Obviously this was nowhere near the official combined figure of 83.1mpg, but for the type of driving, we were impressed. The CO2 emission figure for this diesel is a very competitive 89g/km. Mazda UK did say though that they expect around 90% of all sales to be petrol. The diesel is around £1,400 more than the equivalent 115ps petrol, so quite a hefty premium.

Mazda are in for a busy year with new car launches and facelifts; they have the all-new CX-3 and replacement MX-5, along with midlife facelifts for the Mazda6 and CX-5, so from September the Mazda3 will be the oldest model in the range. 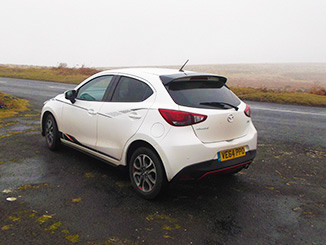 One of the cars we drove had the optional head-up-display (HUD) fitted, a really nice feature, and although the speed and sat-nav was projected onto a small piece of glass, instead of onto the windscreen, it was very effective and easy to see and read the figures and arrows for the navigation system, a nice option to have.

It was enjoyable driving a variety of Mazda2’s around Devon, on a variety of roads, and in a variety of weather conditions. This part of the world has some spectacular scenery, and in some places is like taking a step back in time. The 90ps petrol with its 6 speed gearbox was a bit disappointing, but the diesel and 115ps petrol were excellent. It looks great from the front and side but the rear is a bit anonymous, and the interior trim, fit and finish in the main was very good. The seats are comfortable, with plenty of room for rear seat passengers, and a good deep boot, which gives plenty of luggage carrying capacity. This all-new Mazda has numerous competitors, so it will have to be good to compete, but based on the above it has a very good chance.

Will the massive standard equipment list attract you to the Mazda2?