“It may have taken 20 years, but the Corrado has earned its place in automotive history”

As we get towards the 20 year point since the passing of the Corrado in to history it’s perhaps a good point to reflect on this special car. It bowed out in style in 1995 with the final few models being the very plush VR6 Storm in either green or blue metallic.

The Corrado was a product of the Karmann factory in Germany, a company that had a long history of producing more hits than misses; they just appeared to understand the quality standards that were needed and wouldn’t put their name to anything that they didn’t think was going to be exceptional. 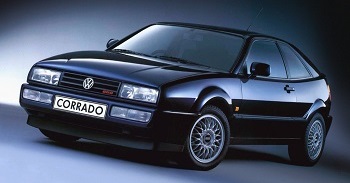 The Corrado had limited sales success in the UK; some of this was down to pricing and some down to its competition. It was up against the Opel Manta replacement, the Vauxhall Calibra from very early in its life, the well-established Toyota Celica GT and the all-new Nissan 200 SX.

At the start of sales in summer of 1989 the Corrado 1.8 16v was priced at £17,000 whereas the Calibra dropped into the market the following summer at £14,750 for the 2.0 8v. The Celica GT was launched at the end of the summer in 1989 at just under £17,000; this was the 5th generation of the Celica. And the all-new Nissan 200SX, which replaced the Silvia, came into the market at just under £17,000 in early 1989. The absent party was Ford. They were without a fastback coupe at this point in time, the Capri was about 3 years out of production and the American import Probe was still 4 years away. But overall the competition had the Corrado covered on price, looks and performance.

One thing the competition couldn’t touch the Corrado on was its build quality. It was at the height of over engineered Volkswagens, but I guess that’s what made it a touch uncompetitive. The motorised rear spoiler was just one example of how over the top it was. The engine choice is what it was all about: it started off with the Golf GTi sourced 1.8 16v, then came the supercharged 1.8 16v G60 and the six cylinder 2.9 VR6 and finally in 1994 there was the much tamer 2.0 8v. You could up spec the trim to leather and add a few other options but that was it as far as trim levels go.

Out of the 100,000 Corrados that were built about 10,000 were sold in the UK with around 3,000 still left today, which is no doubt a reflection on that top notch Karmann build quality. The fastback coupe sales volume during the Corrado’s short life went to Vauxhall with their Cavalier underpinned Calibra and their ability to get into both the fleet and retail markets.

The Good: Volkswagen finally came up with a thoroughbred sports car.

The Bad: The more bulbous VR6 bonnet spoiled the look a touch.

The Ugly: That they didn’t sell more!