“Even though the Carlton was such a big part of company life 25 years ago, it has shuffled off to the scrap yard with very little resistance”

The futuristic looking second generation Carlton went on sale at the end of the summer in 1986. It was all about getting the shape as slippery as possible, even if it did result in a somewhat bland styling, its cue for this possibly coming from the third generation Audi 100, with its record breaking drag coefficient of 0.30. The Audi 100 had a few years on the Carlton with it hitting the UK market in late 1982. The Carlton just managed to beat the Audi when it achieved a drag coefficient of 0.28.

Its arch rival was the Ford Granada, which had built up a very loyal following over the previous decade, had switched to the third generation around a year earlier and this left the Carlton with a lot of work to do. But the Carlton had a few aces up its sleeve, for a start it was more technologically advanced with features such as the LCD instrument display and its more modern Family engine as opposed to the Granada’s 25 year old Pinto power plant. It certainly impressed the motoring journalists at the time and was awarded European Car of the Year 1987, although they had also been impressed a year earlier with the Granada when that was awarded Car of the Year 1986.

There were several trim levels to suit your position within the company car hierarchy. The trims were: L, GL and CD initially, with the high performance GSi 3000 being added in 1987 and the plush CDX coming in from 1988. The L came with hardly any equipment; steel wheels and trims, manual adjust mirrors and manual windows. Whereas the CDX had electric windows, electric sunroof, metallic paint, cruise control, wooden dash inserts and alloy wheels, overall a very nice place to sit.

At this point in history diesel power was mainly for the taxi fraternity and therefore the powertrains on offer were weighted towards petrol. It was a choice between a 1.8 carburettor-fed unit turning in about 90 bhp or the more sophisticated 1.8 injection with 115 bhp. There was also a 2.0 injection version which was around 122 bhp. A 2.6 straight six Injection was added when the range was facelifted in 1990 and this had 150 bhp. The GSi 3000 was powered by a 3.0 litre straight six unit that initially had a 12 valve cylinder head but a couple of years later it became a 24 valve unit and the power just tipped over 200 bhp, which gave it a 0-60 time of just under 8 seconds and a top speed of around 145 mph.

Just for the record, and to acknowledge how far “oilers” have come, the diesel power plant was a 2.3 four cylinder unit with just 73 bhp and no turbo. The turbo and intercooler version didn’t arrive until 1991. Driving a diesel car in the 1980s was a chore, to say the least. 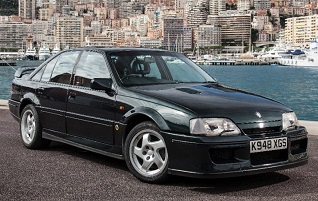 The version of the Carlton that has had legendary status from the day it was launched is the Lotus built version, simply known as the Lotus Carlton. This was the ultimate high performance saloon car. It was powered by a heavily modified version of the GSI 3000 24v engine. It had an increased capacity; to 3.6 litres and was force fed by twin Garret turbochargers; this resulted in 377 bhp, a 0-60 sprint of 5 seconds and a top speed of 164 mph. It certainly wasn’t cheap when it went on sale in September 1990; it was a staggering £48,000. A Porsche 911 (964) Turbo would have cost you £72,993 which was a comparable car performance wise.

The Carlton did very well in the fleet market, which was its main battleground. This helped it to achieve around 100,000 sales in its 8 year life. But its lack of appeal in the modern classic market has meant numbers have dwindled rapidly and there are only around 1,500 left today. Of course the much cherished Lotus built version is the exception with over 50% of 300 or so UK registered versions still alive today.

The Good: The company car list had a Carlton to suit your status in the company

The Bad: Vauxhall had a wind tunnel and they were going to use it.