February 2015 and Year to Date - New registrations by style 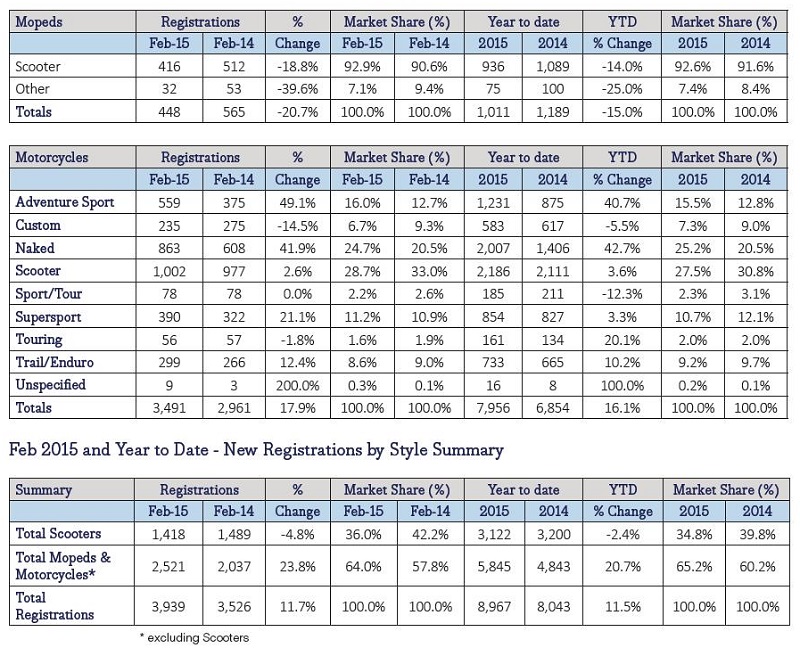 The graphs this month are for the second month of the year and we are happy to report an 11.7% increase compared to the same period last year, and the feedback from research shows that the outlook is continuing to be positive. The motorcycle categories in general have all shown growth. Touring is only one unit down on last year and there is a bit of a blip in the custom numbers this year. With the continued rise of the naked sector and the varied models becoming available, is it possible some riders are moving from one to the other? Adventure style looks like it has had a fantastic month on first glance, but on reviewing the bestselling model in there, it is little surprise that the much talked about new MT version from the Yamaha stable slightly bolsters these numbers as dealer demos and the early retail buyers register their bikes. 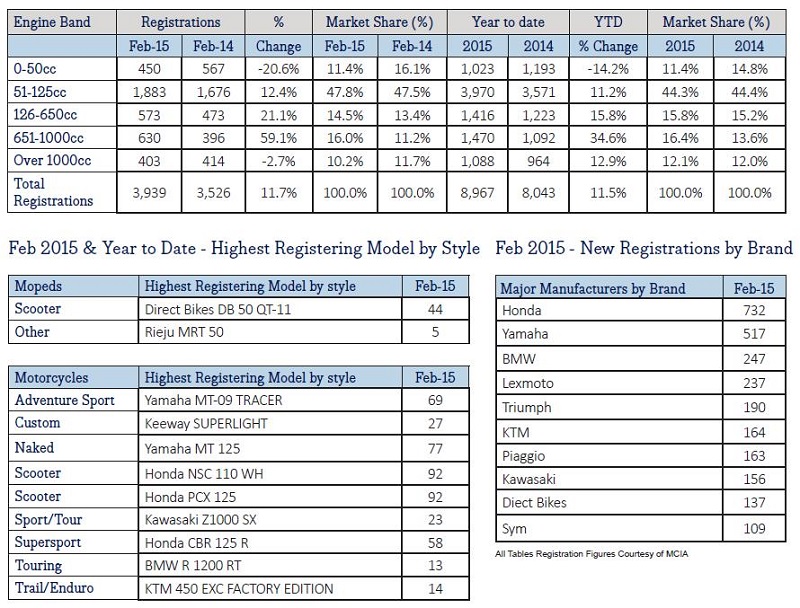 In the engine size tables the sub 125cc numbers excluding Moped has close to half the market share and including the reduced moped numbers, just short of 60% of February’s total new PTW. This is little difference to previous years and as the new plate and the season stars to take hold the real share of the market will become evident.

Still no real complaints heard from anyone spoken to, with footfall still there, although the focus on used can sometimes temporarily take a back seat while the new bikes are being delivered. The word on the street is still one of less stock available than ideal, the situation possibly helped along by the highest Euro exchange rate since 2007. It does sound as though it is a little easier with foreign buyers reduced and part exchanges being brought in a little more than in the recent past helping to fill used sections of dealerships. After the post-Christmas rush to start stocking for the upcoming season it appears as though prices have gone past the initial hike in opinion to a little more stability, (but still higher). This has been reflected in this month’s edition with some models and ranges receiving a lift in prices.

The last research period has seen the first Black Horse disposal of the year at BCA Peterborough. The biggest sale in any auction for quite some time, 219 lots and 183 sold. The Black Horse entries sold 127 from 133 and 3 of the not sold were quads. Interestingly as we have mentioned in the past, the trade have a little more confidence in bikes direct from user and these tend to realise more money than dealer entered bikes. The sale returned 97% of CAP mileage and condition adjusted overall, £88 per entry difference on average. The sale was very well attended by the trade. Bawtry saw another well attended night with again a large number of entries, mainly of high quality. From the 130 entries 103 sold on the night and overall 103% of CAP adjusted figures.

It looks like the CBT will get harder under Government plans. Proposals announced by the Department for Transport include making CBT more ‘tailored’ to individuals and “ensuring that during the on road ride trainees have demonstrated their competence to ride unaccompanied”. As we know, new learner riders must take a CBT, which was first introduced in 1990. Riders then have to pass their full motorcycle test within two years or take another CBT. A DfT spokesperson said:  “The proposals include upgrading CBT to improve the riding of younger learners, which has been largely unchanged for the last 25 years”. The plans under consideration include the structure and content of CBT courses, the qualification process for instructors and standards checks for instructors, which assess their ability to teach pupils. Transport minister Claire Perry said: “We must do all we can to improve road safety and I hope our proposals to change the training will do that.” The consultation runs until April 21. The EU rules limiting young riders to smaller motorcycles could be the reason that the number of under-19s taking a motorcycle test fell by 90% after new rules were introduced, from 6,788 one year to a little bit over 500 the next. These figures are the total number of 16-18-years-olds to take a Module One test – the first part of the practical riding exam – from April 2013 to March 2014, compared to the 12 months before that, but the latter figure is for 17-18-year-olds alone and does not include 16-year-olds. The DSA previously denied the drop is a result of the rule changes (3DLD), instead blaming the fall on people rushing to get their test in before the changes, leading to a natural drop in numbers afterwards. But recently the DfT and DSA admitted ‘very few’ young riders go on to take a test after doing CBT, and it ‘may be an unintended consequence’ of the new licence rules. Also when announcing the consultation, transport minister Claire Perry said it was ‘shocking’ that 19% of motorcycle casualties involved riders under 20. The public generally view CBT as a one-day course and many trainers arrange their business model to deliver CBT on that basis. Trainees need to move away from the idea that simply completing a day’s course will automatically mean that they are fully competent to ride a moped or small motorcycle unaccompanied and is particularly relevant for young riders. The total number of people to take the Module One test has also fallen, from 66,050 in April 2012-March 2013 to 46,263 in the following 12 months. From April 2011-March 2012 the number was 59,594, up from 57,711 the year before.

Better training makes better, more responsible riders and consequently a hopeful reduction in accident statistics. Let’s for a minute compare the training needed for two-wheels to a learner in a four-wheeled vehicle. Take a CBT for a day to make sure you can make the thing go forward, add in a bit of theory knowledge, let them ride around in heavy traffic albeit on a not very powerful bike, (but you don’t need much power to ride under an oncoming bus, you need power to get out of the way). Car driving students learn totally under the supervision of a qualified driver until proving a standard to pass a test, then can go out and buy a vehicle of any power. There are holes in both systems that make an ideal solution far from easy but we all have ideas. More learner training for new two wheel riders? Limit new car driver’s power on a stepped basis similar to the motorcycle system?