Dec 2014 and Year to Date - New Registrations by style

Dec 2014 and Year to Date - New Registrations by Style Summary

New Market
Well for most of last year we have been putting in this editorial that if the market carried on as it was, there was going to be the first six-figure number in the total PTW box since 2009. After a year where every month beat the new numbers when compared to the previous year, it is great to be able to say the market finished up by 10.6% (9,369) and there were 101,277 new machines registered in 2014. The big winner for the year was the naked sector with over a quarter (26.2%) market share and with 23,713 registrations in 2014 an enormous growth compared to the previous year with just under a third more. The only sector not growing through the year was the mopeds, but that has seen a steady decline for a few years now, so the 1.2% less is probably a good indicator that the 16 year old rider’s machines have found their level for the moment. The market has at the moment shown little difference at the start of a new year compared to the finish of last year, it is a little early to make predictions yet but all the signs are there for the resurgence to continue this year, although another 10% increase would be nice it is a big shout. Around CAP towers we envisage a 5% increase a strong possibility. Looking around the internet at industry commentators and speaking to dealers, it looks like most are going for some growth.
Dec 2014 and Year to Date - New Registrations by Engine Band

Dec 2014 and Year to Date - Highest Registering Model by Style 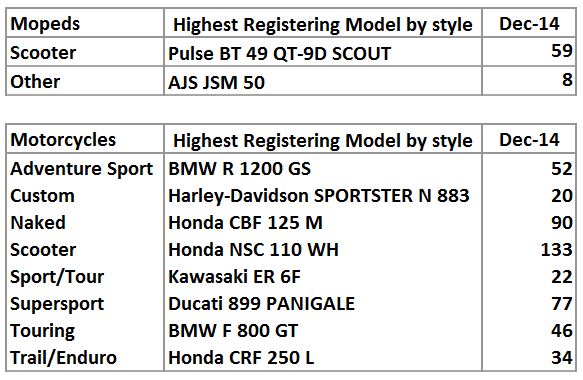 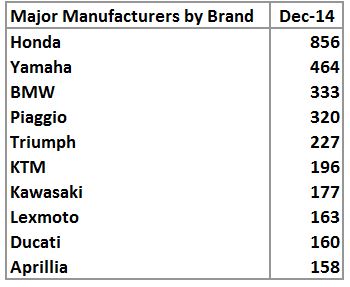 Honda have again finished at the top of the pile in the UK powered two-wheeler sales for 2014, with a 6% increase in the numbers they registered from the previous year and up to 18,110 units. This is a 17.9% market share, a little down from the 18.6% in 2013 but the market did have less registrations that year. Yamaha came in second place with a 19.3% increase in their registrations (to 12,998 units), it looks like the investment and marketing of new models is paying off. Their market share went from 11.9% in the previous year to 12.8% in 2014. Added together the two had a share of the domestic market of almost a third of all PTW registrations for the year.

In the engine capacity tables the usual suspect in the shape of learner legal sub 125c models have the lions share but a positive that can be seen is in the larger size bands. Although initially the market share for the two categories over 650cc look to have only grow the odd percentage point, because of the increase in overall numbers the effect in percentage terms has been watered down a little, but looking at the actual change in the amount registered see’s an impressive 18.3% growth in the 651-1000cc band and 13.7% in the over 1000cc band. The positive apart from the increased number of bikes being put on the road is that the larger capacity ones are the more expensive and would suggest there is more money being made available from the riding public. Not only a good sign for the industry, but the economy in general.

After the Christmas lay off where most of the country appears to stop for a month these days, the reports coming in are of a reasonable show of interest through the doors, but the main topic is one that has been discussed at great length for an appreciable time now and is not getting boring as it will be the main obstacle for retailers to overcome for a long time. It is of course the lack of available quality low mileage bikes available for stock. As we move into the new season and anyone who lowered stock levels during the quieter times starts to look at filling the holes on the sales floor the resultant effect is probably obvious, prices rise. This increase has been reflected in this month’s edition continuing the lifting of prices started in the first edition of the year and looking at the trend in increased usage of motorcycles, the increased attendance at last year’s NEC show and complaints of stock acquisition problems, it won’t be the last.

It looks like the thirst for stock and buying patterns in the auction system is going to continue as it did last year. Bawtry auction saw the conversion of 75 entries at 80% and the average return after mileage adjustment was 105% of Green Book reported prices, or in money terms £100 into “book”. West coast also continued with a sale similar to the ones at the close of last year, with lower numbers of entries but prices close to the expected in most cases and buyers showing willing to bid. The BCA sale at the end of this month with the first of the popular with dealers, Black Horse disposal, is going to be interesting.

Last year Ducati had a record year for the manufacturer, delivering 45,100 bikes to customers. That equates to a 2% increase on 2013, the 5th year on the trot of growth. Monster models increased by 31% selling 16,409 units worldwide, a global market in which they demonstrated growth – some significant - in most markets, Brazil + 74%, Asia, +11%, Australia +13% and China where sales almost doubled. Other more established markets didn’t necessarily perform as well though with the biggest market - 8804 units - North America similar to the previous year. European sales slowed down by 3% - to 19,743 bikes – with most standing still but notably the domestic market for the brand in Italy, down 14% (to 4,284 bikes) and the UK with a strong growth of 16% (2,742 bikes). Looks like again a manufacturer investing in new models and infrastructure in emerging markets has shown it’s possible to grow.

The UK market looks like it’s been very good for the German BMW brand in 2014. Bike registrations grew by 14.6% here with 6,959 more bikes sporting the blue and white propeller running around our streets. This is a bigger growth than the manufacturer enjoyed worldwide where the growth was 7.2% up to 123,495 units.

And if this month’s editorial has not been positive enough for you, pointing out that racing season starts again later in the month with the first meeting at Philip Island in WSB should leave most with a smile and what could (will) be a good year for the Brits (again).