Well it’s that time of year again and as we all head down to the NEC we're enthusiastically awaiting all the new offerings. As part of the industry we are there to show the riding world what is on offer for next year, catch up with fellow industry professionals and set out a plan for the coming year.

Most of you reading this were there for various and differing reasons so why was I there and what did I think of it all this year?

Several routes into the area were having congestion problems – including mine – so initially this looked like last year on the same day (first Tuesday), and as lunchtime approached it got busier and noisier and walking around got more difficult. 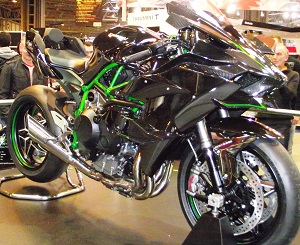 These days with no specific trade day, as there used to be, dealers are not as concentrated into one place at the same time so it makes it easier to walk around without bumping into people every ten yards. Well that’s the theory anyway! Queue for tickets, talk to two dealers, queue for VAT receipt, see more dealers, then at the entrance turnstile more dealers.

Most dealers are still lovers of motorcycles and are there to look at them so after swapping thoughts on what we all want to look at, the bike lover in me takes over and as the time is approaching for a dyno run of the H2R, Kawasaki’s hand built, mad, track-only, limited edition, dreamed of by many but only going to be owned by a handful of the few.

The crowd is large, the bike is noisy, spits fire and everyone stood around is grinning eagerly. Ok so we are blokes and not designed to grow up. The adult in me starts to surface just a little as I am stood next to the health and safety police with a meter reading 121dB and they are apparently using 3,000 rpm below the max.

Ah well, I suppose I am here to work (surfaces from the back of a still buzzing brain) so I make a bee-line to the nearest manufacturer on the “to do list“. 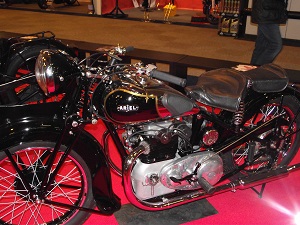 During the day there was time to catch up with people already met during the previous year, people I have spoken to but never had chance to press the flesh, and perhaps my favourite, new people.

There is a consistent theme running through every conversation I had during the day, so a generic re-telling will fit most of my activities on the day.

The theme is a good indicator on how the industry has changed over the last few years: PCP.

How many machines are being brought in to the country? How is the new machinery being marketed? All in a quest by manufacturers to get the residuals set in a way that will help sell new bikes.

And before the uninitiated think it’s all about the highest possible residual to get the lowest possible consumer repayment, think again. One thing I took away from the day is that the manufacturers are really thinking about how to sell now, keep the customer in the market and sell them another in a few years.

It’s not about bringing lots of bikes into the country and getting market share or registration numbers in the short term, it’s about a thoughtful approach to long term trading. 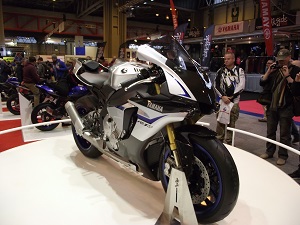 And this leads me on to what was on show for next year?

Well the usual fast and sleek crotch rockets made their mark and what was most noticeable was that all that the punters trying them on for size are still the same ones that have been doing the same thing every year for years.

But sneaking up slowly on all of us is the fact that it’s getting more and more difficult to get the old bones over the seat, and where do I put this belly?

This leads to the thing that most stuck in my mind from the day: nakeds, adventure, A2 licence holders and new models on a theme of easy to ride with comfort aimed at the changing riders we have in the country. This is apparent at the forefront as we move into next year.

The over riding feeling from the show is optimism for next year.