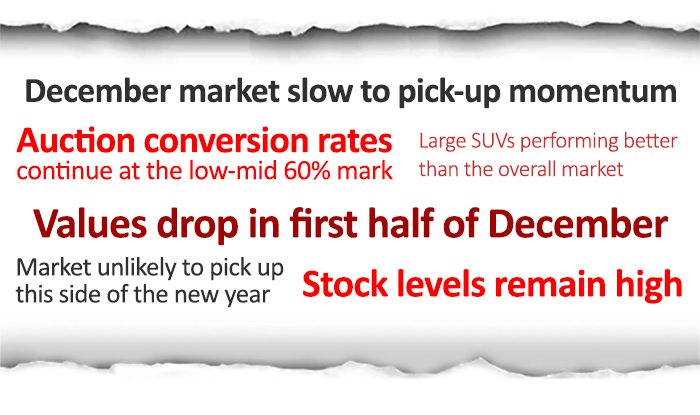 Following a particularly difficult November for vendors, where market prices realigned themselves after an especially strong year, December has been slow to pick-up much momentum.

In the past, a monthly Book drop such as that seen moving into December may well have stimulated the market, an average drop of 3.1% at 3 years, 60k miles was recorded. However, in Black Book Live all movements are purely reflective of current prices achieved in the marketplace, so a market upturn off the back of the Book movements was always unlikely to happen.

Conversion rates at auction have stayed close to where they were for the last 2-3 weeks, at around the low-mid 60% mark. Stock levels remain high and whilst buyers are still frequenting the halls, they remain discerning when buying for stock. Whilst some are stocking up for January, this does not seem to be widespread and many are openly admitting they are pretty much done buying now until the New Year, particularly as retail consumers are generally staying away, concentrating on Christmas.

As a rule values have been dropping in the first half of December, although certainly not to the extent that they did in November. Bucking the trend are certain SUVs, particularly larger 4x4s, which after not performing particularly well in November have now started to rise in value, more in line with usual seasonal patterns. This will be helped by any harsh weather as we move through the month.

It is unlikely that the market will pick up this side of the New Year, however whatever happens Black Book Live will continue to produce values daily, reflecting what is actually happening in the used car marketplace.