Values forecast to be under pressure 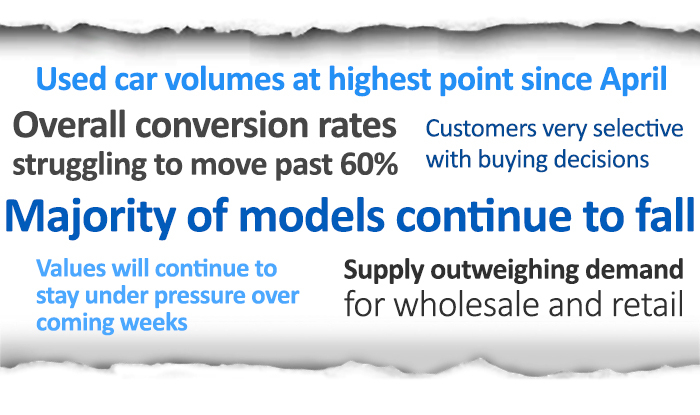 Following on from a tough October, as reported both mid-month last time around and in November’s Black Book Editorial, this month has continued in a similar vein.

It has been difficult to pinpoint ranges that have gone up in value in November – there are usually some pockets of strength – as this month the majority of models continue to fall.

Overall volumes in the used car marketplace are at their highest point since April, and pressure on price is being felt as supply is outweighing demand by some distance. This is the case in both the wholesale (trade to trade) arena and on retail forecourts. There are plenty of cars already available for the general public and plenty of choice for dealers looking to replenish stocks.

Auction companies are stacked up with cars generated from two strong new car registration months. Attendance levels in the halls are reasonable, but these customers are being particularly selective with what they buy. As we reported last month, ex-retail part-exchanges are proving far more popular than what can be described as “run-of-the-mill” ex-fleet cars. Whilst conversion rates overall are struggling to move away from the early 60% region, some fleet vendors continue to only sell around one-third of the cars they are putting through auction, as they hold out for difficult to achieve prices or they find out that buyers are not currently in the market for what they have to offer.

With retail customers thin on the ground as they start to focus on Christmas, it is difficult to see how prices will recover over the coming weeks. Whilst Black Book Live values within our daily product are adjusted by what the Editors see within sold data, it is fair to say that we can forecast values to be under pressure for a while yet.