New Market
It’s that time of year again when the focus of the world’s road race fans turns to a little island in the Irish Sea. It is also a time when reports for dealers suggest the retail demand and particularly showroom traffic has slowed “because of the TT”. This year is no different, but is that the whole story? There is little doubt that a sizable lump of potential customers are off the mainland and living in a tent for a week but there could be the coming together of circumstances that include final payments for summer holidays due. Whatever the cause, the result is the same, it’s gone a bit quiet.

May 2015 and Year to Date - New Registrations by Style 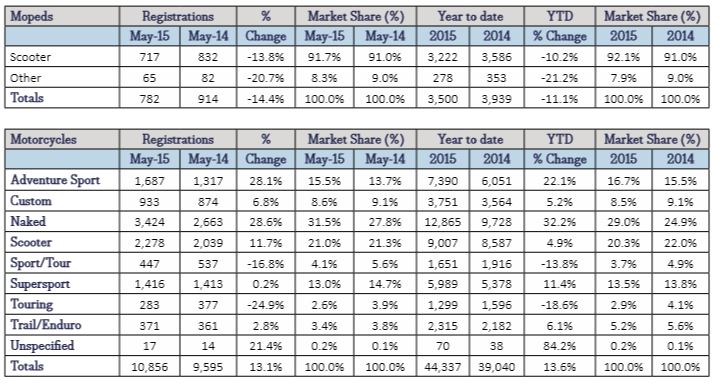 May 2015 and Year to Date - New Registrations by Style Summary

The latest available new registration figures (May) are pointing to consistent growth again. Overall the PTW growth has continued in double figures at 10.7%, which is 1,129 up on the same month of 2014. Although this is a tadge lower than the year to date increase of 11.3% some of the reduction is down to the continuing decline of the Moped sector, so increases are in the bigger ticket larger capacity offerings.

May 2015 and Year to Date - New Registrations by Engine Band

May 2015 & Year to Date - Highest Registering Model by Style 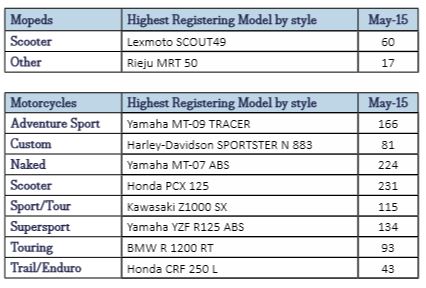 May 2015 - New Registrations by Brand 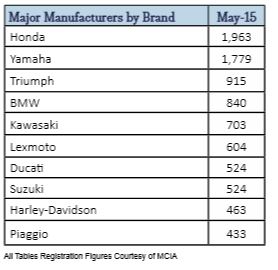 This month’s numbers are pointing to a good one for the learner legal engine size offerings with nearly a fifth more this year than last and the only engine band to significantly differ in a positive direction from the YTD market share.

Used Market
The weather being on the cooler and slightly damper side compared to last year, coupled with the above reasons have calmed down the pre-owned areas out in the shops. That said there are deals still being done. Conversations around the stock levels have now moved away from being difficult to obtain, more towards most needs satisfied with the odd hole to be filled. The consequence of this is of course as demand eases a little the willingness to be generous with bidding and the statement “into book” is seldom heard. Although the selling season has still some time to run, there is sensibly one eye being kept on the upcoming quieter times and as the odds on selling most season dependant examples dwindles slightly the opinion of its worth also reduces. In preparation for this and more aimed towards the end of the month, the prices in this month’s edition in general have been eased back ever so slightly.

Auction
Around the halls over the latest research period there has been a noticeable shift in the results. At BCA in Peterborough there was a large entry of 125 with a Black Horse offering just over 70 and Moto Novo just over 20 with both finance houses selling all. The sale overall finished with 90 sold equating to just over 70% hit rate. One point worth noting is the quality of lots was lower than has been seen in the first half of the year and with a reduced attendance the result of a bit less than 90% of CAP was little surprise. West Coast fared better on the quality front and with only a couple of exceptions, 65% of the 50 entries selling and most were close to top marks on our conditioning scale. Final results came in at 96% of CAP. Bawtry saw a large entry of 150 with some very high value machines offered from a dealer’s complete stock disposal. Large numbers of Harley-Davidsons with high reserves being offered at this time of the season are always going to struggle to find a new home and this didn’t help the final result, with a bit less than 60% selling. The final 93% of CAP result was affected by the large amount of entries, lower attendance and later lots selling below due to reduced bidding.

End Notes
We have touched on the growth of the industry in the Indian sub-continent in these pages before and the possibility of the area being the next big influencer on the global market. Well recent news is again suggesting that not only numbers, but quality is a driver in manufacturing.

Harris has already worked with Royal Enfield on the design for the frame on the Continental GT and will have involvement in new products. The manufacturer has bought outright the frame builder and staff at Harris Performance will now become employees of Royal Enfield, taking responsibility of performance and development engineering for a new range of motorcycles and become part of the manufacturers UK Tech Centre we mentioned here previously. Harris is another “name” in the industry who have moved into the Indian brand’s auspice’s,  including people from disciplines in project management and design who have formally worked with Triumph and Ducati, to bring new models to market. They are turning into a serious global contender for the future.

The much discussed latest bright idea of getting rid of the paper counterpart to the driving licence has crashed the DVLA website on the first day. Inevitable one could say, as perhaps look-ups were not necessarily needed but an element of trying to see if it works type look-up.

At the recent MotoGP of Catalunya a big talking point was the RC213V-S, ridden around by Casey Stoner. It sounds a bit expensive but no doubt there will be plenty of takers and little doubt a future classic. The big stand out for race fans has got to be the continued winning run of Danny Kent and the records he Is breaking set back in the day by Barry Sheene. One thing that has changed over the years is one was a household name known for living the life and appearing on the front of tabloids with women hanging from him, the other is unknown outside die-hard race fans. Is it motorcycling in general has become unpopular or the expectation is for a “bad boy” image and a polite, intelligent, clean cut kid cannot cut the sensationalism mustard like an overpaid kickballer? If the other sports get headlines for losing let’s get a winner’s name out there and who knows a bit more interest in the sport in general. One thing is for sure, if the lad gets a lucrative advertising contract there will be the smell of Brut around Green Book Towers in support.