It's that time of year again when it is Trick or Treat, with kids knocking on your door, all dressed up in scary clothes, or at least trying to look scary. But some of the sights they must see on the other side of the door must sometimes look more scary. Old ladies in Onesies, and with no makeup on, must frighten the poor kids half to death.

Anyway, we thought we'd take on the Halloween theme and test drive the car that Batman drives, the famous 1955 Lincoln Futura.

The Batmobile-to-be was the brainchild of Lincoln Mercurys post war Chief Stylist Bill Schmidt. He was inspired by an encounter with a shark, but survived, and designed a long, low wide and flat vision of the future. With a predatory full front grille, ominous with shark-like hooded headlights and killer tail fins; the shock of seeing that shark certainly had its impact on Mr Schmidt.

The original car was built by Ghia at a cost of $250,000 and was named the Futura. It was shown for the first time at the Chicago Motor Show in January 1955. The Futura did an American tour, but unfortunately the Futura turned out to just too futuristic. 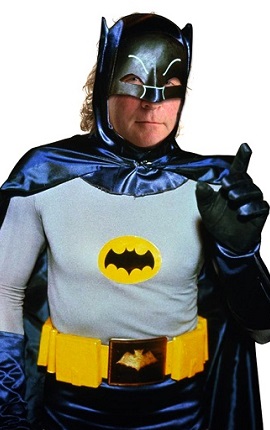 The unwanted, and unloved car ended up in the possession of George Barris who was commissioned to build the Batmobile for ABC’s upcoming Batman series. He only had three weeks to turn the Futura into the Batmobile. But with a quick body job and a repaint - pow, boom, ka-bam - the Batmobile was up and running!

But what is the Batmobile like to drive? It is powered by a 330hp V8 petrol engine that goes from 0-62mph in a lot longer than you would imagine. Coupled to a turbo-drive automatic gearbox it is fairly sluggish, and not exactly the right car for chasing baddies.

It is the length of the Futura that is quite terrifying though. Measuring almost 19 feet long, it is staggeringly huge. However, despite the car's long length, it is only a two-seater, with no rear seat, just a huge boot to store all those anti-Joker/Riddler equipment.

Parking it in Morrison's car park is not easy, but worse than that, pushing your trolley around the supermarket with your underpants over your trousers and having shoppers come up to you saying ‘Riddle me this, Batman’ (whatever that means) is quite embarrassing. The pitfalls of getting into character...

The brakes are not particularly good, but don’t worry as the car does have the Bat-Parachute for quicker stopping or for doing a quick-turn. There is a special Bat-Parachute pick-up service signal, which comes to pick up the disgarded parachute, take it away, iron it and deliver it back to the Bat-Cave. Very convenient.

Other standard features include: Infra-red Bat-dust which glows in the dark (but only visible when viewed through the Batmobile's specially tinted windscreen), a super-powered Bat-Magnet for opening steel doors from a distance, a Bat-Zooka for firing explosives and the classic Bat-Rope to help swing off the top of tall buildings.

Other standard equipment include a nose-mounted chain slicer, lasers, rockets, on-board radar, rear smoke emitters and a nail spreader. All these goodies are ideal for driving around Huddersfield, as you just never know when you need to get to the top of a skyscraper quickly or need to cut through a thick chain. There is some real handy stuff fitted to this car. Disappointingly though: no cup-holders, air-con, MP3 or sat-nav.

The popular TV show was known for its upbeat theme music and camp moral lessons, such as championing the use of wearing seat belts, doing homework, eating veg and drinking more milk. Wholesome stuff.

Strangely though, as my day progressed, I kept seeing a Penguin following closely behind me. Maybe there was something wrong with the rear-view mirror?

During the time I had the car I did find it difficult for anybody to come in the car with me, as they did feel embarrassed.

However my mate Robin volunteered to ride-shotgun, and he really enjoyed himself. It was annoying that he kept saying ‘Holy CAP Batman’ and ‘To the Batcave’ – when he clearly knows I live in Highburton, and nowhere near any cave. Perhaps he took it too far.

As a side note it was good to see that the anti-intrudor ejector seat still works after all these years. The hospital say he will make a full recovery soon.

The Batmobile was an interesting car to use for a few days, a bit thirsty with that huge V8 motor, and press the wrong button in the cockpit and you can end up in a lot of trouble.

It looks fresh and modern – sort of – although the quality is nowhere near as good a today's American cars.

Anyway off to the Batcave…. look I’m saying it now.

Enjoy your Halloween. Personally, and it is a personal view, I’d ban it…