The impact of extended replacement cycles on the LCV used market

Most companies will budget to replace their vehicles after a specific cycle of operation whether they are wholly owned or on some form lease/hire agreement. Since the recession many companies have chosen to extend the life of their vehicles in order to save cost. The downsides to this practice are of course are the additional costs of servicing, breakdowns and having to fund repairs that would normally have been covered by the vehicle manufacturer’s warranty. Less obvious though are the benefits of new technology that would have been gained from replacing on or ahead of schedule, such as better fuel efficiency, lower emissions and often increased service intervals.

It’s also easy to overlook the contributory effect that extended replacement cycles has had on market prices of used LCVs which reached record highs earlier this year. Whilst auction entry levels have progressively returned to pre-recession levels, generally there is still uncertainty over supply volumes, shortages of certain models and quality since vehicles are generally older, with higher mileages and carrying more battle scars.

The burning question is would the prospect of higher actual residual values (current values) of LCVs lead to shorter vehicle replacement cycles. To answer this we need to look closer at how age and mile affects market values of used LCVs.

Arguably, no better working example of the UK’s market economy can be found than in the remarketing of vehicles through open auction sales. At auction halls throughout the country the actual worth of all types of vehicles are discovered, rather than being set by any individual, through a process of competitive bidding. With so much capital tied up in the funding of vehicles and the potential for thousands of pounds to be wiped off the inventories of large fleet, contract hire and leasing companies, as a result of only marginal fluctuations in the market price, it’s little wonder that there’s so much discussion over factors that can influence current used LCV values and residual value forecasts.

Focussing on the used LCV wholesale market, there are of course many factors that can influence market prices and rarely, if ever, can this be narrowed down to any single one in isolation. However, it can sometimes be useful to use a simplified model to gain a greater understanding of what’s actually happening in a complex and dynamic system and the used LCV market is a case in point.

Perhaps the simplest example and the one which most people can easily relate to is, how a vehicle depreciates in relation to age and mileage.

The following charts are intended to give a brief flavour of the type analysis we routinely carry out a CAP as part of our market research. The data behind these charts represent 57,694 individual sales results collected from auction sales across the UK over a 6 month period - between May and October 2014.

The first chart clearly shows that the majority of vehicles entering the used LCV wholesale market (58%) were between 30 and 54 months. The most common plate was 2011/11 (30-36 months old) which accounted for 20.5% of all LCVs sold at auctions. 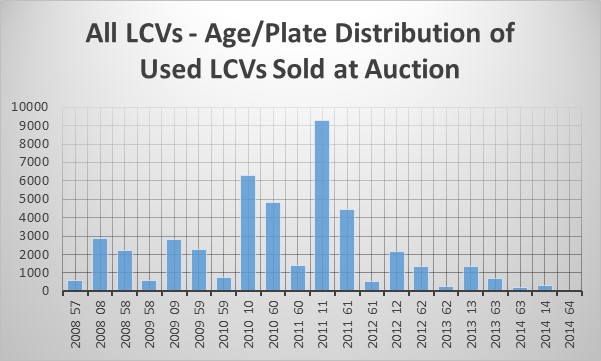 A simple but logical assumption you might draw from this is that with such a large proportion of vehicles spread across an age band of 30-54 months, according to the law of supply and demand, prices would fall below the market trend.

This is exactly what the second chart (below) illustrates. The average price of all used LCVs sold in the 30-54 months age range of plates fall well below the average market price trend line. It also shows that buyers were prepared to pay above the trend line for vehicles with a 2013 plate onwards. Similarly, 2008 and 2009 also sold above the trend line albeit for much lower values. 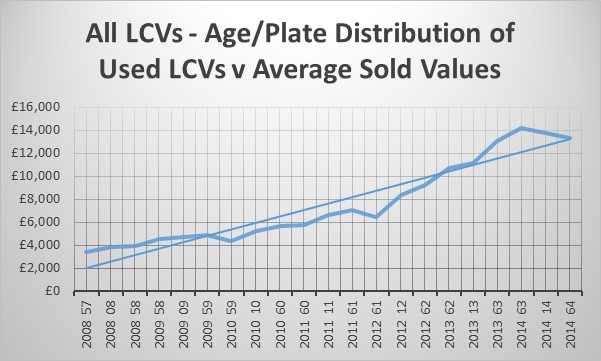 When using this model for real this would of course warrant further analysis. This may entail identifying any specific sector, model range or even an individual model that is bucking the trend.

The following chart identifies vehicles in the VAT Qualifying range of vehicles as being largely responsible for pulling down the overall average values on the 2012/61 plate. 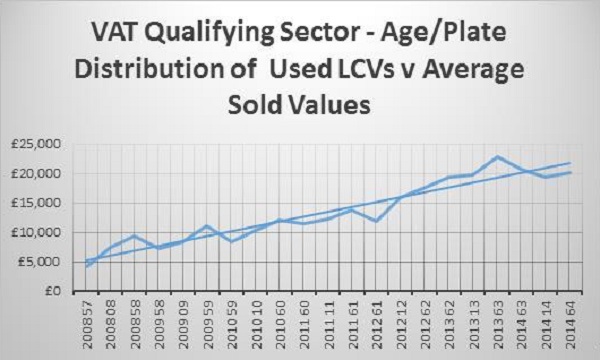 A more common reason why values can buck the trend stems from a characteristic of the LCV sector which no other sector of the motor industry suffers from to the same degree - large de-fleets. We often see extremely large volumes of exactly the same model all in the same colour and same specification enter the market from a particular fleet operator. The professional buyers in the wholesale market soon latch onto this and know that the vendors can only hold out so long for their reserve prices. Invariably the market prices for that particular model will fall. The overall effect of these de-fleets can pull down the average sale performance for the complete model range or even the entire sub-sector. 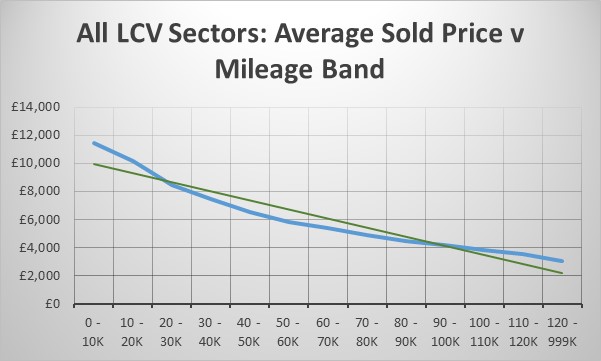 When looking at average values against mileages it is necessary to group the sale records according to mileage bands. These can vary according to the type of vehicle operation. For example a vehicle that’s been converted into a motorhome may cover only around 3,000-5,000 miles a year whilst the same van operated by a parcel delivery company during the same period can easily clock up 40,000 miles.

The chart above shows that overall mileage depreciation follows pretty much a straight line curve with buyers prepared to pay significantly more for vehicles with 20K or less miles. At the other end of the scales high mileage vehicles often represent extremely good value for money particularly if those miles have been spent mainly on motorways. 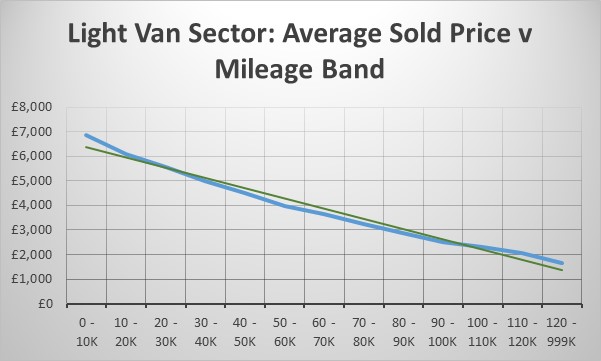 In the chart above, the Light Van Sector runs almost in line with the overall trend for this sector. However, there is a considerable deviation from the overall trend line in the 4x4 Workhorse sector chart below which would prompt further analysis. 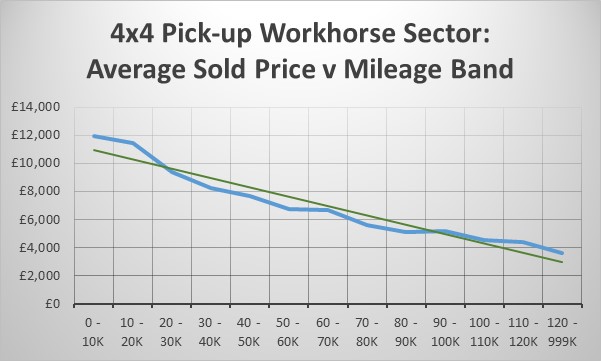 By combining vehicle age and mileage and age in the same chart (below) the analysis is taken to the next level. This chart below clearly shows that buyers expect to pay considerably less for 2-3 year old vehicles that have clocked up over 26,000 miles. 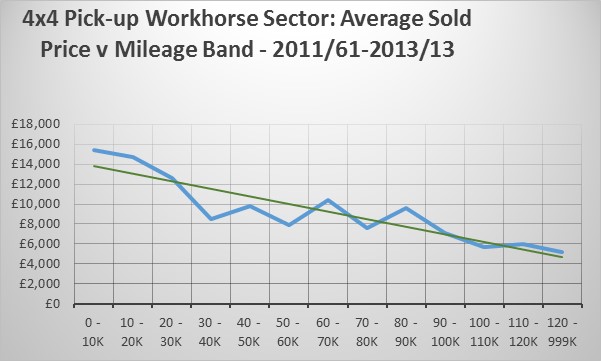 In summary, hopefully this brief foray into the analysis of used LCV auction research data demonstrates that it sometimes helps to simplify things in order to understand what’s actually going on in complex situations.

Market prices are dynamic by nature and rarely stand still for very long. When they do change, there are usually more than one if not several reasons. Age and mileage are the basic drivers of vehicle depreciation and they are the basic parameters used to set vehicle replacement cycles.

At best though they serve as the starting point of any research analysis and can often identify where to look next.